Black History Month: The sporting heroes who changed our lives 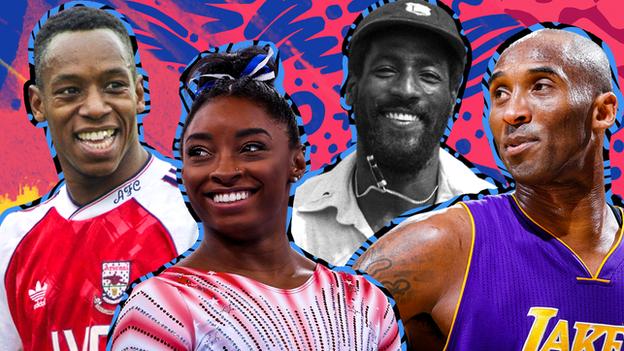 Who is your black sporting hero? Who is the sportsperson who first meant everything to you, brought you boundless joy, conquered the world and changed your life in the process?

To kick off Black History Month, we asked BBC Sport staff who their personal hero is, who helped shape their identity, who made them fall in love with sport.

As a child, Ian Wright had a profound impact on me. As an adult, nothing has changed.

Back then it was the gold tooth, the Bogle dance goal celebration and the cocksure way he strolled around a pitch. Today it’s the way he continues to use his voice to speak out against all forms of discrimination.

He looked, sounded and behaved like people I was surrounded by growing up in south-east London. If Ian could make it, so could any of us. Although my dreams of becoming a professional footballer didn’t pan out (Dulwich Hamlet’s reserve team is the closest I got), now being employed to report on the sport isn’t a bad back-up.

My life and Wrighty’s life have some uncanny parallels. I share the same name with his mother (yes, Nesta) and I played in the same youth team as his son Shaun Wright-Phillips. As a child I played for Ten Em Bee FC – the same team where Wrighty got his start.

My grandmother always used to say don’t place flowers on her grave, she wanted them while she was alive so she could smell them. So Wrighty – thank you – here’s a big bunch of whatever your favourite blossoms are – take a sniff!

This summer, Simone Biles reminded me, and many others like me, that it is OK to choose yourself.

Athletes today are not just athletes. They can be public speakers, political activists or role models and they use their platform to raise awareness, but on top of that they are humans.

Simone demonstrated that at the Tokyo Olympics, when she decided to pull out of the gymnastics team final and focus on her mental health.

“We have to protect our minds and our bodies and not just go out and do what the world wants us to do,” she said.

This reminded me that life is short and that every decision we make to do, or not do, something is precious. Do what makes you happy.

As a former horse girl who spent some of my formative years barrel racing, I always felt shut out of rodeo. Myrtis Dightman showed me there is space in rodeo for me.

The first black cowboy to compete at the National Finals Rodeo in 1964, he qualified a further six times after initially being told the only way he could ever compete is if he were white. Bull riding is badass – I can’t think of any other event that crams so much drama in to eight seconds – but not as badass as breaking down barriers in a sport everyone associates with Good Ol’ Boys.

Dightman is a true legend, and even though my barrel racing days are behind me I’ll always know I belong in the saddle.

Growing up in the ’80s, black excellence was underexposed but there was no hiding the West Indies cricket team, or Viv Richards.

I’d watch him walk out to face the fastest bowlers with no helmet, chewing gum, ready to entertain. Then he would dominate, but in such a way that even his opponents would love him for it.

Viv showed us black kids that we too could be the best and do it our way. He was also fiercely proud of his black roots, sporting red, gold and green sweatbands on the pitch.

I had the honour of meeting Viv once and he told me that turning down a fortune to play cricket in apartheid South Africa was the greatest thing he did in his career. Hero, legend, GOAT.

My life can probably be divided into two distinct parts – life before Barnes, and life after.

His ascendance to the top of English football with Liverpool in the late ’80s coincided perfectly with my own coming-of-age. My musical tastes upgraded to Public Enemy, and now was the time to dispense with my dad’s footballing heroes and claim one of my very own.

More than 30 years later, I still feel the same about that man. He changed me. He changed everything.

As a fellow, but drastically inferior youth athlete, I witnessed first hand at track meetings as Mark Lewis-Francis became the most talked-about sprinting talent in the country.

He was destined for greatness, and found that greatness years later on the biggest stage of all.

In Athens in 2004, my family and I screamed all the way down the home straight as Lewis-Francis held off the heavily favoured Americans for Team GB to win Olympic 4x100m relay gold by just 0.01 seconds.

SWP29 had me feeling like the man when I stepped into the garden. Dribbling around the dog before blasting the ball past my uninterested brother, ‘Shauny Wright Wright Wright’ ringing in my head as I wheeled off in celebration.

I liked football before Shaun but after watching him play week in, week out, I LOVED it. You would have thought it was me that scored against Ukraine back in 2004 the way I bragged to my friends about it.

To this day I can’t put my finger on what one thing made him so special to me growing up, he just was. I guess that’s just football.

Growing up, my family and I weren’t huge tennis fans. Of course, Wimbledon was a staple summer event but ask me to name more than five players – male or female – and I would’ve struggled. However, there were two names that captivated my family and the sporting world – Venus and Serena Williams.

Under the tutelage of their demanding father, Richard Williams, the Williams sisters worked tirelessly to perfect their craft in a sport which was and, albeit to a somewhat lesser extent, still is, predominantly white. The colour of their skin brought them unfair challenges and obstacles throughout their careers, yet that did not stop them in their complete and utter domination in the early 2000s.

Anyone who was drawn against either sister was struck with fear. Their skill, desire, passion and talent was on another level. Come up against them in a final and you may as well accept being runner-up.

In recent years, age and injuries have taken their toll, yet Serena is just one Grand Slam singles title away from equalling Margaret Court’s all-time record.

Whether she achieves that or not, the Williams sisters’ celestial sporting status has already been cemented in the history books forever.

I grew up in north London a stone’s throw away from a tennis court. My mum played netball so that was my sport of choice growing up, but I remember one day watching Serena play against her sister at Wimbledon and this was a game-changer – to see two women of colour in a major tournament final playing a game I never knew much about.

I recall from this point forward, forever finding myself over at the courts with my brother and cousins playing tennis games what felt like every weekend. If you see it – you can be it, and that was what we were all thinking.

Serena’s determination in coming back year after year is what really inspires me. I love the fact I have been able to follow a sporting star all the way through her career.

Seeing her become a mother and still go back to playing was a deal-breaker – Serena Williams is the black sporting hero I want to shout about.

Growing up my idol undoubtedly was Thierry Henry.

Without remorse he was the best. The best thing was that he knew he was the best, and he executed this brilliance with an unrivalled knowledge that he was untouchable. He lived in that fine line between sheer arrogance and self-belief.

He was the main character in every game he played in, they, being opposition fans and defenders, would try to distract him but so often they would fail – just ask those at the Bernabeu.

Assist record, top goalscorer, Invincible, whatever it was he had it.

As a child in my area there wasn’t anyone who looked like me, especially when we were out on those cold football pitches on a Sunday morning, but for me Henry was someone I could look up to. Someone black and someone brilliant.

Kobe Bryant wasn’t just a basketball player, he was a superhero. The will to win, the desire to make real change, the ability to not feel pain – an icon the likes of my 10-year-old self could only dream of becoming.

Emulating his patented fadeaway with a screwed-up ball of paper tossed into a rubbish bin while exclaiming ‘Kobe!’ was the closest I ever got.

Kobe had the making-free-throws-on-a-ruptured-Achilles level of drive. He set the example of how hard you need to work to achieve, and get better every single day. A better person, ally and father.

For me it will always be Mamba forever.

The athlete who encouraged me most recently is Anthony Joshua. I respected his words after his heavyweight title loss to Oleksandr Usyk in September.

The world was watching, listening and commenting on AJ, and that alone can be a huge pressure to take, but he was able to keep his head held high and use his loss as a foundation to do better.

“I can’t go back and sulk – that’s wasting time,” he said. “It was a great lesson today. I know we can look at it from a negative point of view but I’ve got to take it as a great lesson and build on that situation.”

I appreciate his fighting stamina, to continue to grow, build and learn. As humans that’s all we can do and it’s a reminder that life isn’t always on the up, there’s swings and roundabouts.

The long striding gallop. The poise. The leadership. The ability to block out all the noise.

Growing up in east London as an Arsenal fan, there was only one man who stole my imagination. No, it’s not the Frenchman you’re thinking, it’s the other one – Patrick Vieira.

To see him effortlessly create, destroy, and all the things in between, all while being the beating heart and captain of the most dominant team of the era; it would be impossible to choose anyone else.

He taught a generation of black boys it was possible to lead from the front, to conduct yourself with poise and class, and to be unashamedly yourself. No ‘rar rar’ or bling, no headlines or declaring himself a king, just the coolest cat on the pitch, and purring in every way.

My generation was blessed to have witnessed Patty V in his prime, and I’ll always be thankful for that.

Who is your black sporting hero? Get in touch below

Scandal-hit Ozy Media to shut down

Prince Charles has ‘no knowledge’ of aide honours claim