Hannah Cockroft and Aled Sion Davies retained their Paralympic titles as Great Britain enjoyed a successful final day in the track and field events at the Tokyo Paralympics.

Cockroft secured her seventh Paralympic gold with a dominant win in the T34 800m, ahead of team-mate Kare Adenegan.

Davies landed his third Paralympic title with success in the F63 shot put.

It means GB have now won 41 golds at the Games and a total of 122 medals as they stay in second place in the medal table going into Sunday’s final day.

There was disappointment for Kadeena Cox, who was bidding to win gold in two different sports for the second Games in a row but finished fourth in the T38 400m.

The 25-year-old’s silver means Britain have now won medals in 17 of the 19 sports they took part in with chances in the two others, shooting and wheelchair basketball, to come on Sunday before the closing ceremony (12: 00 BST).

Jordanne Whiley and Lucy Shuker were left with silver in the wheelchair tennis women’s doubles after they were beaten 6-0 6-1 by Dutch top seeds Diede de Groot and Aniek van Koot in the final.

There was also bronze for Amy Truesdale, who lost in her taekwondo semi-final but recovered well to come through the repechage, and for Para-canoeist Stuart Wood in the VL3 200m final. 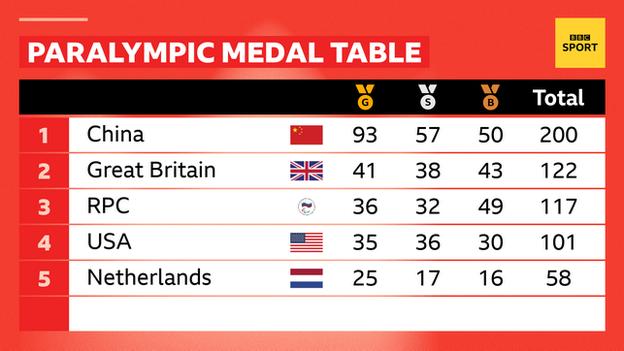 Cockroft and Davies were named as co-captains of the British athletics team for Tokyo and the pair led by example.

The 29-year-old from Leeds broke her own world record to retain her 100m crown on Sunday but just missed out on a second record over the longer distance.

Her new Paralympic record of one minute 48.99 seconds was almost 12 seconds inside her own previous Games best.

Adenegan clocked a personal best of 1: 59.85, meaning she upgraded on the bronze she won in the event in Rio five years ago.

Cockroft revealed afterwards that she had an accident while warming up for the final, causing her concern before the race.

“I put my hand through the wheel while the chair was moving,” she said. “I’ve never ever done that but I decided to do it today. It was pretty bloody but it’s fine.”

Davies, who won discus gold and shot put bronze in London before the discus was dropped from the Rio programme, led from the second round of his event and although his winning effort of 15.33m was well off his best, the torrential rain made throwing very difficult.

“I’ve learnt so much over the last 18 months and had to evolve and adapt and become self-sufficient almost.

“It’s so hard to win medals – the conditions, everything was against me out there.

“I’m still young and I feel great. I feel like I’ve got a lot to give. Paris is definitely the next stop, even LA (the 2028 Paralympic Games). We’re just getting started.”

Sport switches pay off for Henshaw and Sugar

As a swimmer, Henshaw won silver at London 2012 and bronze in Rio, but finally got the colour she wanted after switching to Para-canoe.

The 34-year-old retired from the pool in 2017 in order to change sports, winning the KL2 World Championship title the following year – a title she retained in 2019.

In Tokyo, she faced tough competition from team-mate Wiggs, who won the Paralympic title in the event five years ago.

The pair looked set for gold and silver from the start of Saturday’s race, pulling away from the rest of the field early on before Henshaw then edged ahead, setting a new Paralympic best time of 50.76 seconds.

“It’s amazing. I feel a real sense of gratitude that I got the opportunity that I was able to race for this medal,” said Henshaw.

“It was a fantastic race and incredible that Emma and I were able to again get the top two steps on the podium. It just shows the strength that we have in British canoeing, and I’m very proud to be a part of it.”

A change of sport also paid off for Sugar, who competed in athletics in Rio.

She was spotted by Para-canoe through the talent ID process in 2018, and sealed Paralympic gold three years later in some style, clocking a Paralympic best of 49.582.

“It was a bit of a blur really. I knew I had to nail my start and then the racer in me comes out halfway through the race,” she said.

“I only think about nailing the start and it paid off. I am just glad it has all gone to plan.”

GB’s canoeists finish the Games with seven medals, including three golds, putting them top of the sport’s medal table.