The final few weeks of the season feel perfectly poised – with Liverpool and Manchester City about to go toe to toe, and with so much at stake.

They are the two best teams in the country and they have been miles ahead of everyone else for a few years now with the standards they have set.

Their consistency has been unbelievable too and they both have such great variation in their squads – that’s why they both have a chance of taking all three major trophies that are still up for grabs.

You don’t really know anymore what Liverpool’s starting XI is going to be, particularly in the front areas, and you can never predict what City boss Pep Guardiola is going to do when he picks his team. 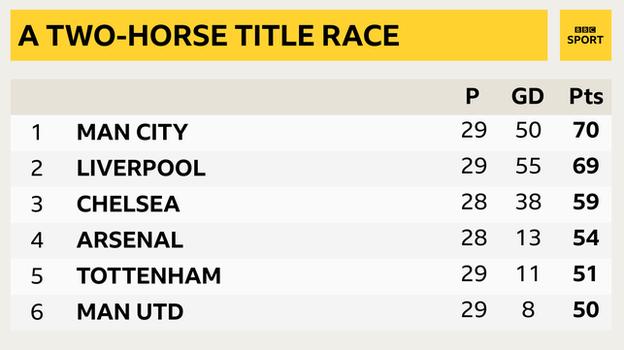 I’m looking forward to all the games that both sides have to come, because there is so much riding on every one of them, but especially when they play each other in the next few weeks.

We know that will happen at least twice – in the Premier League at Etihad Stadium on 10 April – and in the FA Cup semi-finals at Wembley the following weekend. The Champions League final on 28 May is obviously a possibility too.

It’s great to see. I think if you love football, you love watching the best teams – with the best players and best managers – going head to head on big occasions like these, with all the quality and intensity on the pitch and the pressure that comes with it.

It is the little details that will decide the big moments when two wonderful sides like Liverpool and City meet.

You want games like that to be settled by a bit of genius but it could be a tiny mistake – one person switching off and losing concentration on a set-play at the wrong time.

Right now, Liverpool just seem less likely to do that. Jurgen Klopp’s side know how to get the job done when they don’t play well, which is a knack City have not had in recent weeks, helped by the fact the Reds are not conceding goals at the moment.

Part of that is because they have got a brilliant goalkeeper in Alisson who is on the top of his game, and some quality defenders too, but it’s also because they are on a run where it must feel like everything is going their way.

I’ve been there, when you know you are getting the rub of the green in games because you see the opposition miss big chances or decisions go your way, but then you go on and win.

We saw that happen for Liverpool against Nottingham Forest in the FA Cup on Sunday and, for their players, it will just add to the feeling that it is their time. That’s how I’d describe the way Liverpool are looking, more than City anyway.

Liverpool have already got the momentum from cutting their deficit to City in the league from 14 points on 15 January to one point now, and they are also in the semi-finals of the FA Cup and have got a favourable draw against Benfica in the last eight of the Champions League. The confidence around Anfield must be phenomenal.

Who will win what from here?

The FA Cup semi-final will carry the least pressure for both teams, but it will be treated differently in terms of selection too.

Liverpool have already won a domestic cup this year, and City have won plenty of them in the past few seasons so I think, right now, both teams would agree that trophy is the least important of the three.

The other two competitions are the big ones, and my gut feeling is they will win one each.

For some reason, and I don’t exactly know why, I think Liverpool will win the Premier League.

That game at Etihad Stadium is going to be absolutely pivotal in the title race, because whoever is top after that is going to be very hard to catch – I just don’t see either team dropping many points elsewhere.

It’s a big ask for Liverpool to go there and win, because even Klopp has only done that once in the Premier League since 2015, but I just have a feeling the Reds will come out on top.

At the same time, I think it’s going to be City’s year in the Champions League. The general aim when you are talking about tournament football, whether it is elite club competition or at the top end of the international game, is that you want to consistently go deep or go close, time after time.

Do that, like City keep doing in Europe, and you will win in the end.

If I’m wrong and City end up empty-handed, or Liverpool just win the Carabao Cup, then their seasons would be seen by some as a failure.

Not by me, though. For me, a bad season is the one Manchester United could end up with if they finish outside the Champions League places as well as missing out on silverware again.

It would be devastating of course but, to use an extreme example, if City or Liverpool finished runners-up in the Premier League, Champions League and FA Cup, to me, that would be close to perfect.

For both of them, just getting this far means their squads have been playing at a consistently excellent level for the whole season, and competing at the top of European football and domestically for eight months.

So, whatever happens next, it has already been a very good season for Liverpool and City, but it could turn out to be a very special one.

Media caption, Watch: Depp 'slapped and kicked' Heard on a plane over 'affair'Amber Heard says a perceived affair with fellow...

Roman Abramovich says he has not asked Chelsea to repay £1.5bn loan

Convenience store chain McColl's is on the brink of collapse, placing thousands of UK jobs at risk.The retailer said it...

By Matthew TuckerBBC NewsThe election day tradition of photographing dogs at polling stations has been loyally followed again. With voters...

By Chris MasonPolitical correspondent, BBC NewsA fractious UK. A fractious Westminster.As the final votes are counted, we can now survey...