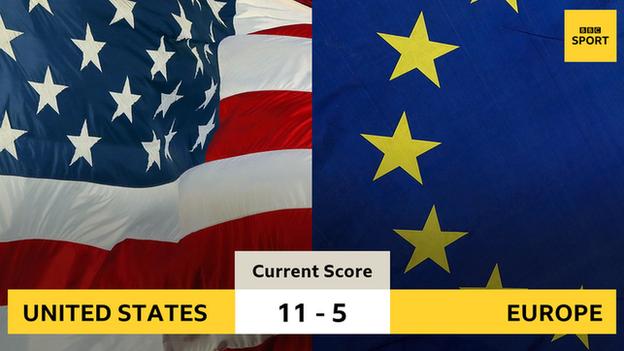 The United States look set to regain the Ryder Cup after another dominant display on day two at Whistling Straits saw them open a record six-point lead over Europe.

The home side, who led 6-2 overnight, extended their advantage to 11-5 and need to win just 3½ out of the 12 points on offer in Sunday’s singles to take the title. As defending champions, Europe need to reach 14 points to retain the cup.

The biggest final-day comeback is four points, achieved by the US at Brookline in 1999 and Europe in 2012 at Medinah, when both sides came from 10-6 down to win.

“It’s only half a point more than we won in the singles at Medinah. There’s no doubt that is going to be strong in our minds.

US skipper Steve Stricker is trying to eliminate Europe’s ‘Miracle at Medinah’ from his thinking but also said “it’s not over yet”.

Harrington has picked the mis-firing Rory McIlroy to lead off the singles on Sunday, despite the Northern Irishman having suffered three heavy defeats so far this week. 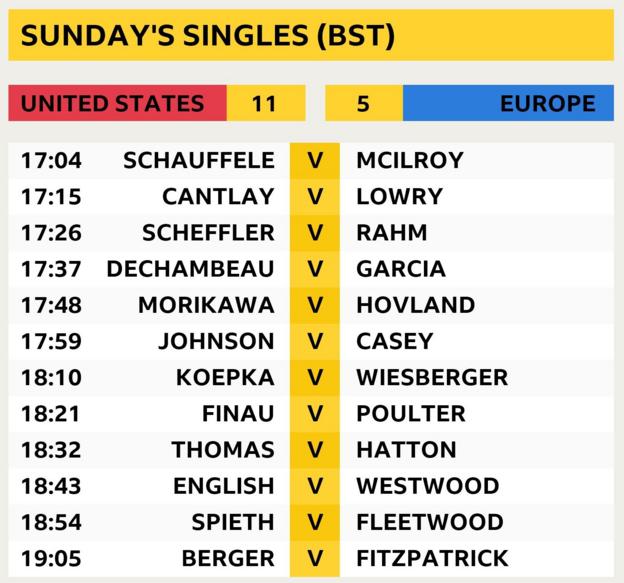 Europe needed a fast start on Saturday if they were to eat into the record four-point advantage opened up by their hosts on day one.

But the morning foursomes was another session in which Europe were as poor on the greens as the Americans were dominant.

Eleven of the 12 American players contributed at least a half-point on Friday, with only Jordan Spieth missing out. However, he and his good friend Justin Thomas were victorious as the US won the session 3-1 to open a 9-3 lead.

Thomas then suddenly appeared on the first tee and gulped down a beer before spraying the rest into the air and slamming the can into the ground, to the delight of the already exuberant American fans in the stands.

It was an extraordinary display from Thomas, despite knowing he would be sitting out the afternoon fourballs session.

That Europe are not further behind is chiefly down to the efforts of world number one Jon Rahm, who partnered his fellow Spaniard Sergio Garcia to victories in both their matches on Saturday and has now won 3½ points this week.

They followed their 3&1 win in the foursomes with a 2&1 triumph in the fourballs, as Garcia, playing in his 10th Ryder Cup, further extended his records of most matches won to 25 and his individual points tally to 28½.

As with the morning session, it was imperative that Europe got off to a fast start in the afternoon.

They did just that and were leading in each of the top three matches after nine holes on an afternoon of tense drama on the shore of Lake Michigan in Wisconsin.

Rahm holed putts of 45 and 27 feet to put Europe three ahead after seven holes but Brooks Koepka pegged them back with birdies on the eighth and 10th.

Another Koepka birdie on the 13th levelled the match but Jordan Spieth, who missed several putts of around 10 feet, was again wayward on the 15th, allowing Rahm to put Europe into a lead they would not relinquish and he rammed in a 29-footer to also win the 16th.

That point came moments after Shane Lowry showed immense courage to hole a 10-foot putt on the 18th to win Europe’s fourth point of the contest.

The Irishman, playing with Tyrrell Hatton, eventually triumphed in a tight contest with Tony Finau and Harris English that became just the fourth to go down the last.

By this point though, Dustin Johnson and Collin Morikawa, the world numbers two and three, had easily seen off the challenge of McIlroy and Ian Poulter, winning 4&3 in the bottom match.

It was the third heavy defeat of the week for McIlroy, who missed his first Ryder Cup session since making his debut in 2010 when he was left out of the morning foursomes.

For Johnson though, it was a fourth victory of the week from the first four matches – the first American to achieve that feat since 1975.

That left just one match out on the course, Tommy Fleetwood and Viktor Hovland’s titanic battle against Scottie Scheffler and Bryson DeChambeau. Europe badly needed a win to go into Sunday trailing 10-6 and conjure memories of Medinah.

There was never more than one hole in it over the first 13 as the momentum swung from Europe to the US and back again.

But DeChambeau rolled in a birdie putt from seven feet to take the 14th, after Fleetwood had missed from 10. Scheffler then knocked in another from 16 feet and a third successive birdie followed on the 16th as the US took Saturday’s final point. 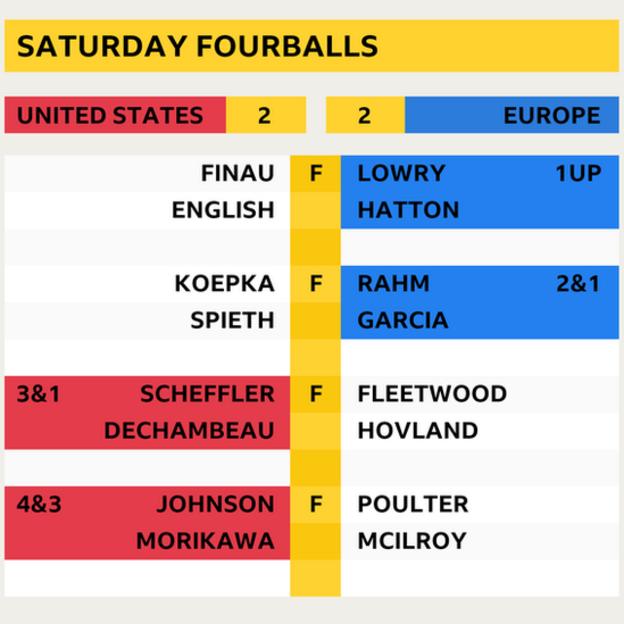 Rahm and Garcia had lost the first three holes to Koepka and Berger in Saturday morning’s opening match but the younger Spaniard holed a birdie on the sixth and the former Masters champion chipped in from off the front of the ninth green to spark a turnaround in fortunes.

Johnson and Morikawa were always in charge of their match against Paul Casey and Hatton, winning the first three holes and moving four clear on the eighth.

The English pair rallied to get back to one down when Casey sensationally holed his second shot on the par-four 14th from 107 yards, but Hatton missed a five-footer on the 15th to hand the advantage back to the Americans, who won 2&1.

Hovland and Bernd Wiesberger, who raced three ahead after six holes, were all square after 10 against Spieth and Thomas. The rookies then missed par putts on the 14th and 15th holes as the Americans went from one down to one up and although the match went down the last, another European error – the Austrian hit into a stream – gave the point away.

Xander Schauffele and Patrick Cantlay holed lengthy birdie putts on the seventh and ninth and they took further control of their match against Matt Fitzpatrick and Lee Westwood when the English pair bogeyed the 10th and 11th holes.

A Westwood birdie on the 16th proved in vain as the Americans wrapped up a 2&1 win on the next. 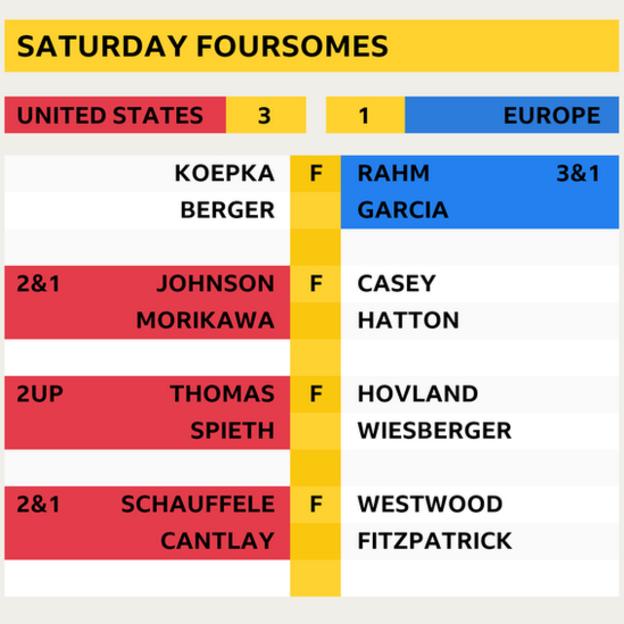 The fresh Latino panorama: These are the reviews within the relieve of a decade of substitute